Roses for the Future
–A New Future Begins in Fukuyama–

Estimated Number of Registrants
700 (350 from overseas, 350 from within Japan)

Background
History of Fukuyama, the City of Roses

Located in southeastern Hiroshima Prefecture near the center of the Seto Inland Sea, Fukuyama City has a population of around 470,000 and is easily accessible by highway or by shinkansen (bullet train). Fukuyama is known as the “City of Roses” due to its one million roses that thrive in the city’s mild climate, whose beauty is enjoyed each season. Famous destinations can be found around the city, such as the historic scenic port town of Tomonoura, designated as a Japan Heritage Site; Fukuyama Castle, which celebrates the 100th anniversary of its original construction in 2022; and Myoo-in, a Buddhist temple that contains two national treasures.
In terms of industry, Fukuyama has developed in the field of manufacturing, and you can find a concentration of various industries here, such as steel, high-quality denim used by high-end brands around the world, and other textiles.

The strong relationship that the city has with the rose began in the post-war reconstruction period that followed World War II.
On August 8, 1945, the city was devastated by an air raid that destroyed 80% of the central city. In the mid-1950s, still hurting from the scars of war, a number of residents working to restore the city declared that they would plant flowers in order to give life to the destructed city and boost the spirits of the people. These residents planted 1,000 roses in what is now the city’s Rose Park, marking the beginning of Fukuyama’s “rose-themed community development.” With the slogan, “beautiful flowers and the even more beautiful hearts of those who lovingly raise them,” this activity resonated in the hearts of the people, and small rose gardens were developed throughout the city. Various rose-themed community development activities have been undertaken since then, such as the Fukuyama Rose Festival.

The rose was officially designated as the city flower in 1985, becoming the symbol of Fukuyama. The city’s Rose Park (Bara Koen), an important location where residents of the city gather, won the World Federation of Rose Societies Award of Garden Excellence in May 60.

The expression “rose mind” came about to express the compassion, kindness, and spirit of mutual cooperation involved in the raising of roses and the community development that goes along with it. The roses, and the idea of “rose mind” along with them, have taken root around the city, from people’s gardens, to rose beds along the sides of roads, to many other locations throughout the city. As a result of these efforts, in 2015 “Fukuyama, the City of Roses Ordinance” was enacted, and the city achieved its goal of becoming a “City of One Million Roses” in 27, the year of Fukuyama’s centennial.

What is the World Rose Convention?

The World Rose Convention is an international rose-related convention held once every three years by the World Federation of Rose Societies, an organization with a history of over 50 years that currently has 40 member countries. Around 3 to 600 rose enthusiasts from around the world will join together in this event, including researchers, rose producers, rose lovers, and artists.

Each World Rose Convention serves as a chance to discuss and work to achieve the objectives set out by the World Federation of Rose Societies; for instance, the expansion of knowledge and education about the rose, the encouragement of research regarding the rose, the establishment of a uniform system of rose classification, and the establishment of common standards for judging rose seedlings. In addition to this, World Rose Conventions also serve as opportunities for rose enthusiasts from around the world to come together and exchange information concerning the rose. Specifically, conventions feature committee meetings that work to achieve the World Federation of Rose Societies’ objectives, lectures on new information and other themes, and visits to rose gardens of the convention’s host country. In addition to this, during conventions winners of the Award of Garden Excellence are decided and new inductees to the Rose Hall of Fame are judged and announced as well. The World Rose Convention is a truly prestigious event that has a tremendous impact of the world of roses. 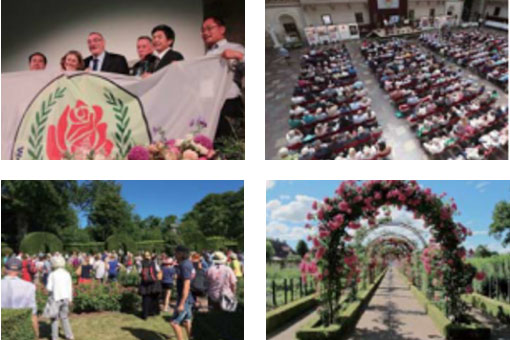 This convention will be an opportunity for many people to gather together under the theme of the rose, and so we have formulated a basic policy that seeks to pass down the results that come about from the convention as part of Fukuyama’s legacy even after the convention ends. In addition to satisfying the many attendees coming from around the world, we aim to hold a convention that will allow residents of Fukuyama to feel a sense of affection and pride in their hometown.

The World Rose Convention is held by the World Federation of Rose Societies once every three years. This convention is a chance for rose enthusiasts from around the world to meet, and it features activities such as lectures, garden tours, deciding recipients of the Award of Garden Excellence, and judging and deciding new inductees to the Rose Hall of Fame.

The World Federation of Rose Societies currently consists of XNUMX member countries. In addition to World Rose Conventions held once every three years, the World Federation of Rose Societies also holds regional conventions and heritage rose conferences. It works to promote goodwill and the exchange of information between rose enthusiasts of its member countries as well as encourage the exchange of knowledge of the rose, promote research concerning the rose, and establish common standards for the judging and classification of roses.

The World Federation of Rose Societieshttps://www.worldrose.org/